Designed by Kyryl Polozyuk. A modern re-imagining of our logo that better reflects who we are, and who we want to be. Our previous logo has served us well over the years, but unfortunately, the mock allusions to secret societies are generally lost on the current membership, so we changed it to a stylised wordmark resembling computer code -- the programmers' tool of trade, the excellence of which we, as a society, wish to promote. Also, ProgSoc is an open and transparent society, so "Ol' Illuminatus" (our nickname for the previous logo) would send out the wrong message to people. 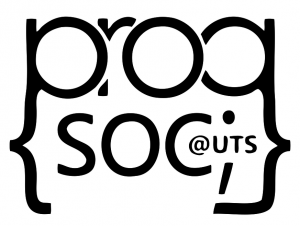 Designed by Iain Sinclair. Announced to the ProgSoc mailing list on the 27th of September, 1995. First officially used in TFM '96. Used on many ProgSoc-branded publications, posters, mugs and other ephemera ever since.

The intended meaning of the logo is left as an exercise for the reader to formulate (although, if you look at the other logos as well, the meaning of this logo will become apparent).

An entertaining interpretation of the above designs. 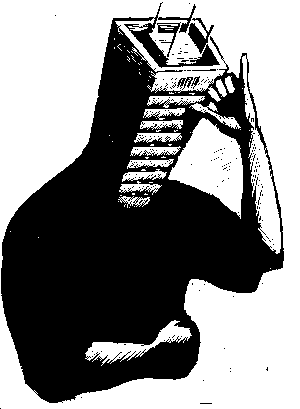 A facetious suggestion for the logo.

Figured out the logo's meaning/significance yet?

While the 'eye in the pyramid' motif may very well appear on the U.S. one dollar bill, the most likely source of inspiration for the ProgSoc logo design would have been from the Illuminatus! Trilogy series of books, in particular, the first book entitled -- funnily enough -- The Eye in the Pyramid.